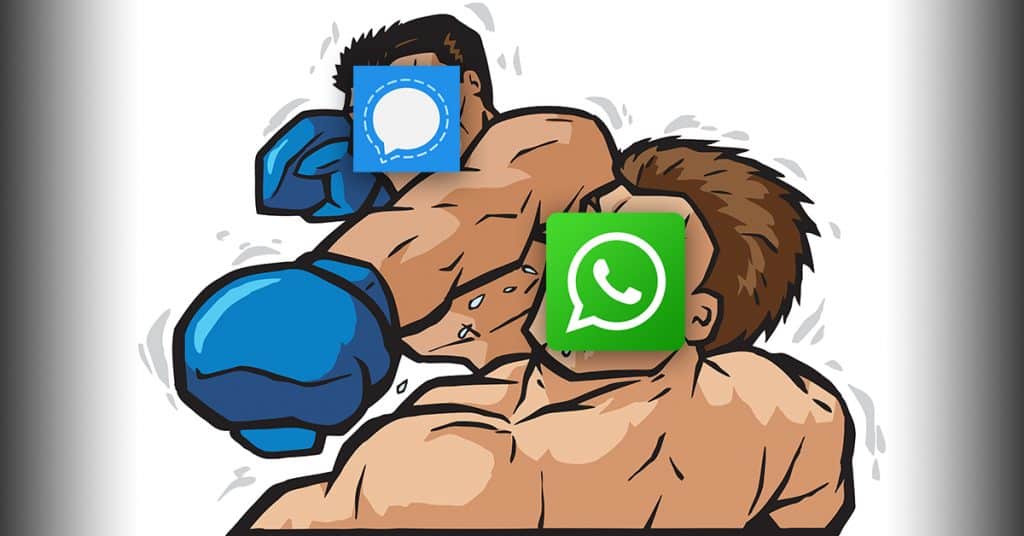 I wrote about Signal and WhatsApp back in July 2020 and called out WhatsApp for being less secure and respectful of its users’ privacy than Signal and Telegram. Then, Facebook went ahead and announced WhatsApp’s controversial privacy policy update while I was on vacation in India. Signal received endorsements from several of Silicon Valley’s biggest names including Tesla’s Elon Musk and Twitter’s Jack Dorsey, and I wasn’t able to publish my own hot take on the situation.

I’m a little late to this topic, but I saw WhatsApp in a new light while I was in India.

There are new WhatsApp features available in markets outside of the United States that help connect the dots as to why the new policy would strip user privacy to help facilitate business-to-consumer interaction on WhatsApp. Ultimately, the privacy policy would encourage business accounts on WhatsApp to link up with Facebook’s back-end analytics infrastructure.

Amid the wide backlash, WhatsApp announced that it would give its users until May to decide whether they consented to the new arrangement. Despite WhatsApp’s repeated insistence that user’s data will not be compromised, the uproar has already morphed into a crisis of confidence. And even though they have backed off for a while, they have made their desire and intent clear.

People who are rage-switching to Signal have probably not actually read the new privacy policy. It doesn’t look like anything has changed with how WhatsApp shares an average user’s data with Facebook. Regardless of what the complex legal documents say, people’s experiences are telling them that they cannot trust companies like Facebook with their data.

For those of you who don’t know, WhatsApp is the top instant messaging app in India (and also these countries – Indonesia, Brazil, Russia, Germany, Italy, Spain, UK and many more).

I vacationed in India to see my parents, friends, and to attend a wedding. One fine day I was out getting lunch with a friend. I scanned the QR code for the menu that took me to the restaurant’s website where I could order some delicious food, I put everything in my cart and proceeded to checkout. I was then prompted to confirm my WhatsApp number. 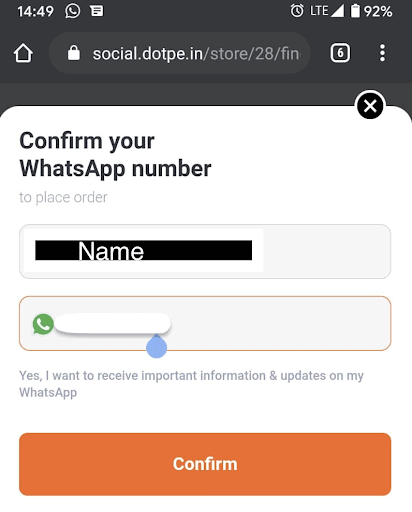 Now, I do use WhatsApp to stay connected with family and friends in India, but seeing this on my phone triggered something. I was amused (and partly offended – did you just assume I had WhatsApp?) and took this screenshot. As someone who has been away from India for some time now, I didn’t realize how ingrained WhatsApp had become into people’s lives and the business sector. As my friend put it: “WhatsApp is the OG in India.”

Yes. Everybody just assumes you have WhatsApp. People love it, and what’s not to love? You can send pictures, videos, live locations, documents, voice notes, make calls, make group video calls. And apparently now you need it to order food too! All this for free! And “end-to-end encrypted”! Just need an internet connection.

Additionally, WhatsApp has been in this space since 2009 and has naturally accumulated a huge user base. With millions of users now businesses are being conducted over WhatsApp.

Over the last year WhatsApp has added more business- facing features such as shopping receipts, catalogs, carts and payments.

WhatsApp is just testing the waters with these features. They are available only in select regions. WhatsApp Pay was recently launched in India and the carts feature is available in Indonesia. WhatsApp (Facebook) obviously wants to roll all these features out to every country. I’m guessing they are taking inspiration from China’s WeChat and the ultimate goal here is to become a complete digital ecosystem where people can lead their entire digital lives.

Facebook probably wishes WhatsApp could be the WeChat for other countries.

All this sounds great, Chinmayee! New features that are making people’s lives easier. What seems to be the problem?

New technologies, AI in particular, are fueled by huge volumes of data. But, free online services come at a cost to the user’s privacy and everyone is too relaxed about the unwritten social contract that says you can use our services for free in return for us using your data to make profit.

Most big techs want to be monopolies. They are transforming existing business models presenting new privacy issues and ethical dilemmas.

This is just what we need – one more aspect of our lives that will be covered by Facebook’s data collection efforts. My crystal ball has started showing images of WhatsApp becoming this multipurpose messaging, social media, shopping and payment app. They have all our data. Big tech owns and controls everything.

Yes, the contents of your messages are confidential. But they are harvesting some metadata. Just look at how much metadata WhatsApp is collecting. 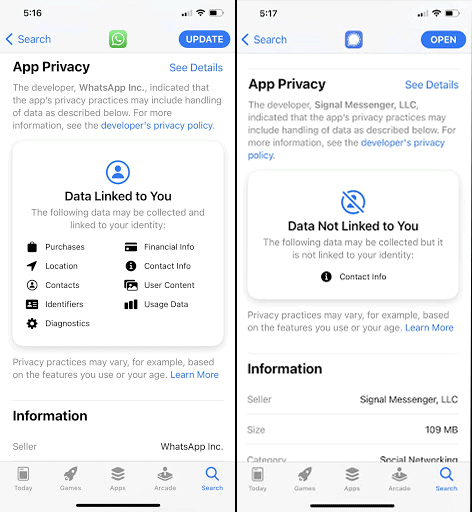 Switching to Signal is Good

Even though most people switching to Signal are just following a trend or doing it because Elon Musk said so, it is still a good sign that people are taking back some (even if it is just a little bit) of their privacy from the corporate interests of big tech.

People primarily love the ease of use and features that come with WhatsApp. But Signal is not far behind now. Since the WhatsApp ‘privacy fiasco’, more and more people have been switching to Signal and Signal has launched more features to improve user experience.

I have been using Signal for some time now and I will say that they’ve gotten so much better than when I started. A quick recap of Signal’s features:

We obviously cannot avoid using Big Tech products and services completely. But, we can try to use sustainable technology that respects users and does not rely on putting a price tag on users’ personal data.

Use Signal. It is powered by an open source protocol and run by the not-for-profit Signal Foundation. Signal collects as little metadata as possible and does not store metadata, logs, or other information on its users. It does not store a record of your user contacts, social graph, conversation list, location, user avatar, profile name, group memberships, group titles. 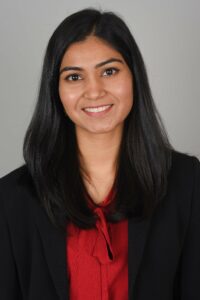